Like many successful entrepreneurs, Ryan Blair has great survival instincts and incredible tenacity.

But what set him apart early on was his "nothing to lose" attitude. It wasn’t for show.

Rather, Ryan quite literally had nothing to lose, which acted as his catalyst for winning.

Growing up in the suburbs of Detroit, Ryan experienced the financial perks of a middle-class lifestyle until it ended abruptly when his abusive father succumbed to drug addiction and abandoned the family. Two of his siblings ended up serving prison time, and one fled.

After that, Blair and his mother moved to a rough neighborhood in Los Angeles. 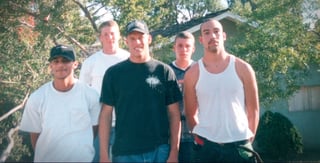 Unfortunately, it was mostly downhill for Ryan from there. He became a ward of the State of California, landed himself in and out of juvenile detention, dropped out of school in ninth grade, and was forced to join a gang and do despicable things in order to survive. He lived in a toolshed for a year, and was arrested 10 times by the time he was sixteen.

So yeah, Ryan went through a lot of pain and loneliness...

In his late teens, Ryan was taken under the wing of a successful entrepreneur (Robert Hunt, to whom his mother later married) who offered Blair an entry-level job at one of his companies (Logix Development), so long as he agreed to return to high school and earn his GED. Ryan agreed to the deal, and took on his first legitimate job.

When Ryan was twenty-one, he started the technical support firm, 24/7 Tech.

Since his early days of desperation and pathless living, Ryan has created and sold several companies for hundreds of millions of dollars while being a single father to his young, autistic son.

Obviously, the challenges have kept coming his way. But he’s used every single one of them to become a business rock star. 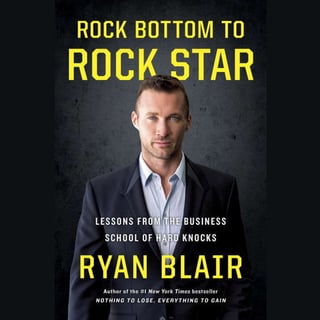 Ryan’s latest book, Rock Bottom to Rock Star: Lessons from the Business School of Hard Knocks, isn't about a charmed path to success or some untouchable fairy tale that nobody can relate to. After all, that’s not what Ryan experienced.

Instead, his latest book is about going from rock bottom to rockstar. He discusses how he’s made and lost tens of millions of dollars (sometimes all in one day) in order to help others avoid the mistakes he made in the school of hard knocks.

Rock Bottom to Rock Star is Ryan’s compilation of unique advice for crushing stereotypes and becoming your greatest self in whatever field you choose to pursue.

3 Key Takeaways from the Book

Sometimes, reading isn’t practical - like when you’re at the gym or driving during your commute.

In these instances, listen to the Eric Siu Growth Everywhere podcast episode in which Ryan takes us on a journey from rock bottom — poverty, an abusive father, and gang life — to living like a rockstar on his own terms.

Learn how he started a venture fund called HashtagOne that invests in technologies, how he bought ViSalus for $75,000 in 2005 and sold it in 2008 for $32 million then bought it back in 2014, and why he says being a better student than a teacher led to his success.

Specific areas of interest in the podcast interview:

You’ll enjoy watching Ryan’s documentary, Nothing to Lose. It provides a riveting look at the more intimate moments of Ryan’s rise from gang member to business tycoon.

Amex Open Forum had this to say about it: “It's one thing to go from rags to riches, and it's another to go from a gangster living in poverty to a near-billionaire entrepreneur. Ryan Blair shares his inspirational story…”

Blair’s books have all been inspirational guides full of powerful stories and lessons that help others form road maps for their own entrepreneurial success. Much of his advice is counterintuitive, and definitely not what you would learn in business school.

After his first book was published, Ryan became a national sensation. Fans started asking him how they could become successful entrepreneurs, too. In his latest book, Ryan shows entrepreneurs how to take their careers to the next level and achieve financial freedom.

So read, listen, and/or watch your way to entrepreneurial success with any of Ryan’s content - not just his books.

You won’t be disappointed.

How to Teach Kids Entrepreneurial Skills During the Holidays

The Best Ways for Businesses to Donate to a Cause